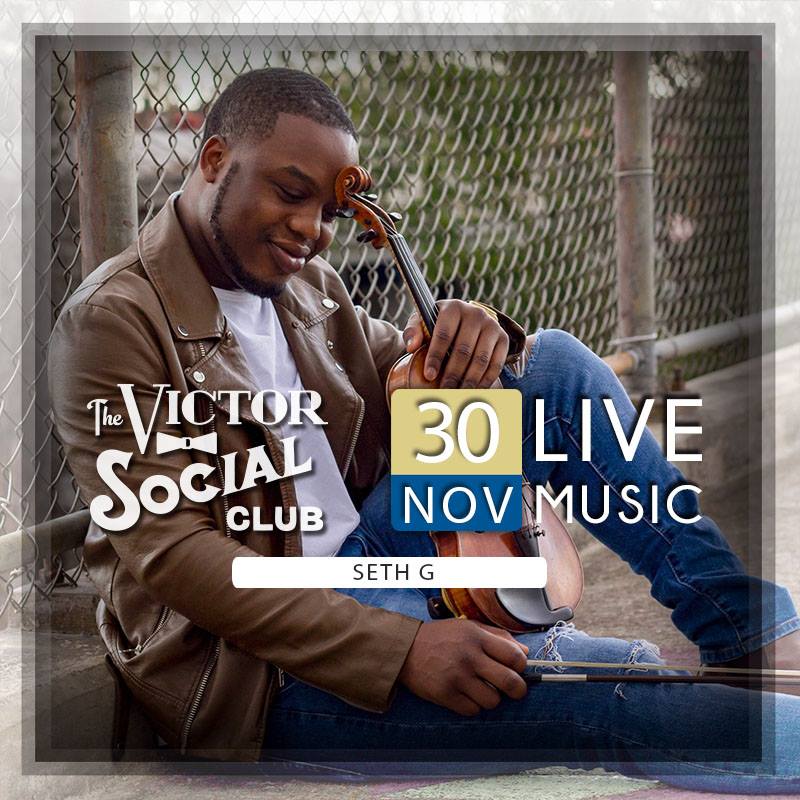 If you’ve never enjoyed a glass of wine at one Charleston’s favorite cocktail lounges known as Victor’s Social Club, listening to Seth G. perform live music on his violin is the perfect excuse. While exploring Hutson Alley and experiencing Victor’s exclusive cocktails and wide-ranging wine menu, listen to Seth G. perform his eclectic style of jazz and pop tunes on his violin. Have a cocktail or two while relaxing in Victor’s unique cocktail club space that features exposed brick, vaulted ceilings and exceptional artwork.

Seth G. is a Charleston native who studied music at Furman University and has performed in various cities around the US. This young violinist has even performed for celebrities such as Oprah Winfrey and Susan Taylor, editor of Essence Magazine. He is known for his pop covers that helped him make national headlines back in 2012 after he was featured in articles by CBS and ABC. He continued to turn heads when he landed himself third-place in a nation-wide YouTube music video contest hosted by Ryan Seacrest in 2014. With over 34,000 subscribers on YouTube, it’s safe to say Seth’s pop covers are a hit. Seth G. creates instrumental covers ranging from famous artists such as Kanye West all the way to Ed Sheeran and Bastille that receive thousands of views on his channel.

Despite his nation-wide popularity, Seth maintains a strong presence in his hometown, as he has been featured in MOJA Arts Festival, Spoleto Arts Festival and the Charleston Symphony Orchestra. Seth continues to live out his passion of creating music by growing his brand and focusing on his career as a performer. Come enjoy Victor’s Social Club’s ambiance by sipping cocktails to the sound of Seth G.’s instrumental melodies this Friday November 30th from 6 pm – 9 pm.